Like most Torontonians, we’re obsessed with the TTC and we’d love to see it expanded in wild and crazy ways. Sure, Transit City’s new LRT tracks are going to improve the system, but streetcars aren’t as sexy as subways. So to indulge our dreams, we decided to collect all of the fantasy maps out there, and we were honestly surprised by the sheer number of them. 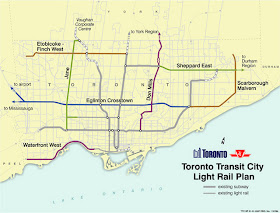 This is the TTC’s actual plan, which the City hopes to have completed by 2020. Considering the problems the City has had in the past with transit expansions, this map might just be the biggest fantasy of all.

Construction on this subway line began in 1994, but was halted by the Ontario Government under Mike Harris in 1995 and all of the excavation work was filled in. The project has been somewhat revived through Transit City’s Eglinton Crosstown LRT, which runs underground and roughly follows the proposed route for the Eglinton West Subway. 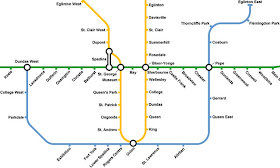 The Downtown Relief Line has been proposed numerous times as a way to relieve congestion on the Yonge Line and at Bloor-Yonge Station. Adam Giambrone, the current TTC chair, wants to complete the line by 2020. This is highly unlikely, as the plans have yet to be finalized and funding is still up in the air. 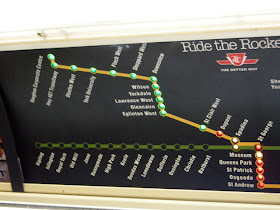 This map was put together for a prototype train on display at the CNE. Apparently, the red lights indicate the stations you’ve been to, the green lights are where you’re going, and the yellow lights represent station interchanges. The lighting system doesn’t seem that useful, but it’s nice to see that the TTC might eventually make it to Vaughan. 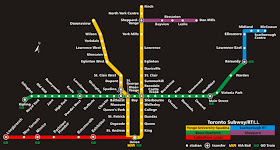 We’re not sure that a Lakeshore line is all that pertinent. 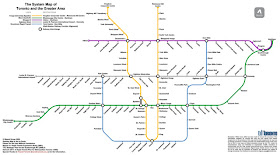 We like this design, except for the lack of new lines in the west end and the fact that the Toronto Zoo doesn’t get a station.

Like the Boat Line, this map needs a vertical line in the west end somewhere around Dundas West station.

The design of this map is pretty good, though the artist might be overdoing it in the northwest. 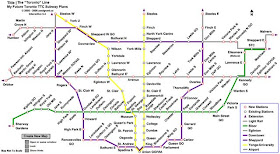 In one of the better ideas we've seen, the DRL and the Sheppard Line have been turned into a loop.

Image by Ryan Felix.Click to enlarge.

According to the author, the new lines are supposed to be LRT tracks. But imagine if they were subway tunnels...drool.

After critiquing the fantasy maps that you see here, we decided to build our own. Check it out. 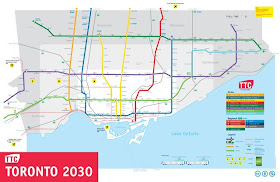 This map was created by University of Toronto professor Dieter Janssen. While I don't agree with all the design decisions—a line on Keele and on Jane seems rather redundant—this is probably the most professional looking map I've seen (including my own). You can read my write up about the map at Torontoist. 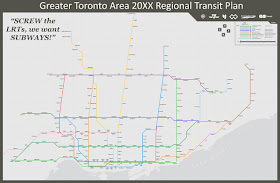 This map is highly unrealistic; though we do love seeing subways everywhere. 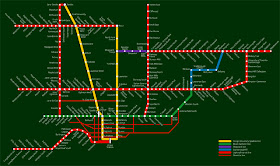 This map mostly just fills in Transit City's upcoming LRT lines, but there are few extensions on the Spadina line and the Scarborough RT. 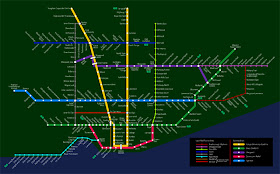 This is a realistic map that makes use of both subways and LRTs to create an integrated transit net. Its only shortcoming is in the west. Etobicoke needs some sort of line—subway or LRT—running north to south. 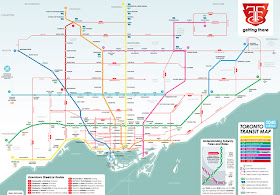 This map was put together by Derek Jensen, a regular Torontoist reader and commenter. I have never been a big fan of splitting the Spadina-Yonge line, but it actually makes sense here. It also has the added bonus of allowing the Weston Line to connect to the Toronto Island Airport. You can read more about this map here. 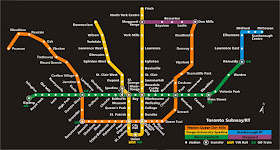 Another proposal for the Downtown Relief Line. 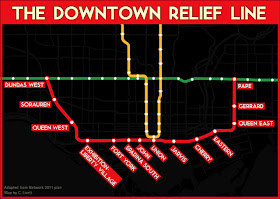 This proposal for the Downtown Relief Line was put together in 1985. You can read more about it here. 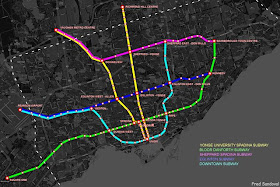 Another practical map from the people over at Urban Toronto.

This is the first time I think I've ever seen a Kipling line. 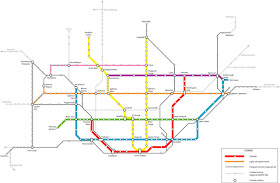